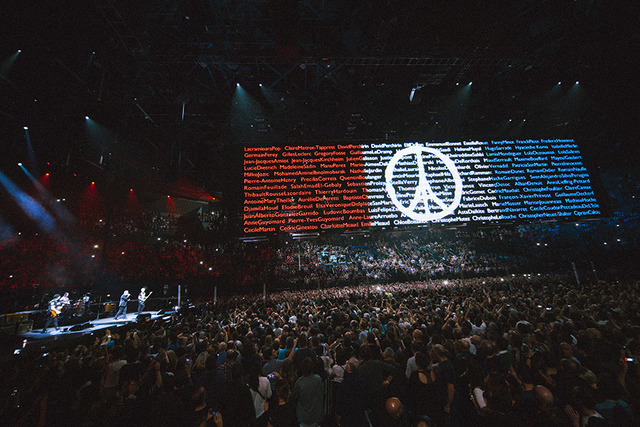 “U2 completed the rescheduled Paris dates for the Innocence + Experience tour last night, ending the band’s sold-out touring activity for 2015 on an upbeat note in a city victimized by terrorist attacks less than a month prior.

“The band had already played two of the four show booked at the AccorHotels (formerly Bercy) Arena when terrorists attacked the Bataclan concert hall during an Eagles Of Death Metal show on Nov. 13, among other sites. U2 had been scheduled to complete the Paris run Nov. 14 (with a live HBO telecast) and Nov. 15, before heading to Ireland to wrap the tour, originally scheduled to end in Dublin on Nov. 28. Those shows were postponed in the wake of the attacks…

“Fogel says there were ‘minimal’ refunds for the Dec. 14-15 shows, about 3,000 of the 34,000 sold.  ‘As they got refunded, they resold immediately,’ he says. ‘It’s a testament to the band and the fans that there were so few refunds, and they ended up being very emotional shows. Paris is an incredible city, with great people, great fans of music. I think [rescheduling] was the right thing to do, and it ended up being a great experience for everybody.'”